(I promise this came out better the first time I wrote it.  Trying to re-write from memory in the final 15 minutes of your work day is a royal pain.)

Ugh.  I don’t think I’ve read a comic in about two weeks now.  A combination of work and Christmas shopping has left me passed out on my train commutes, half-drooling onto my shoulder, but I finally managed to stay awake long enough over the past two days to read the following.

Hello, hero. Are you for hire?

Heroes for Hire #1:  Wow.  Impressive.  I almost didn’t give this one a go.  I’d read the last incarnation of Heroes for Hire which took place during Marvel’s Civil War and really enjoyed it, but the pitch for this one felt weak.  I recall when my co-worker, Dario, read the solicitation in Previews one Saturday and dared me to guess the lineup.  “Who do you think is on the cover?” he said.  I wound up getting four out of the five characters right (Moon Knight, Iron Fist, Ghost Rider, Elektra … Punisher eluded me), and that kind of predictability killed my interest a little.  When the issue came out (last week?  Two weeks ago?), both Comic Shop Dario and Comic Shop Mark urged me to read it.  And I have to say, I’m glad they did.  The writing on this is stellar, and the opening cast is great.  I love the new, unique manner in which Misty Knight is employed—can’t you just hear this smooth, velvety voice saying “Hello, Hero.  This is Control.  Are you for hire tonight?”  Add artwork that keeps up with the script, and you’ve got an entertaining, engaging read, with an ending that should leave you ready for the next issue.

Batwoman #0:  I’ve haven’t kept up with Kate Kane despite her recent surge in popularity.  I’m not sure why, but I just couldn’t get into the character beyond a couple of issues of Detective Comics.  Considering I love the Bat verse and Greg Rucka’s writing, you’d think I’d have been all over that, but I guess there wasn’t enough time in the day, and something had to give.  At any rate, no—I’m not a Kate Kane follower … but I might have to re-think my position after this issue of Batwoman.  J.H. Williams pulls double duty here as both writer and artist, and he does so with a certain level of panache.  The artwork is breath-taking, dynamic, the way each frame moves into the next, each panel transitioning seamlessly to and from the one before, it’s hypnotic, it’s lovely.  It makes me write run-on sentences.  Against the context of the story—Bruce Wayne spying on Kate and Batwoman alike in order to prove his theory that they are one in the same—I’m somewhat enamored of this.

Superior #2:  Better than the first issue; still incredibly uninspired.  The only thing that makes this book worth picking up is Leinil Yu’s outstanding pencils.  It’s a shame they’re wasted on this.  Don’t pay attention to what the front cover says—this is not “the most important comic book since 1938.”  Sorry, Millar, but even your tongue-in-cheek is lost on me.

Daken: Dark Wolverine & X-23 #3:  Dark Wolverine felt rushed to me this month, and I remain unconvinced that Mystique can be taken down and fooled so easily.  Meanwhile, X-23 was a little deeper, and Conrad’s art seems to get better with each issue.  Overall, still reading both of these and still enjoying them.

That said, it’s time for this week’s PULL LIST!  Here’s mine—what’s on YOURS?

Since I fear my constant bellowing over female-driven titles is giving you guys a skewed perspective as far as what is actually in my reading pile, I thought I’d do a quick “What I’m Reading” rundown post.  I am a couple of weeks behind on my comics, what with the holiday rush coming up and the exhaustion of 7:00 a.m. – 7:00 p.m. work days, but I’ve been trying to keep up during my commutes.  Please feel free to chime in with your own reading lists!

Avengers: Children’s Crusade – So torn!  Every issue of this mini has been spectacular so far, but its chronic lateness is killing me and kind of makes me not want to support it.

T.H.U.N.D.E.R. Agents – Enjoyed the first issue a lot, having never read the original book.  Very much on board for now.  That Frank Quitely cover is lovely and a great homage.

Halcyon – Haven’t actually read it yet … hoping to make it to this one on the train ride home later.

Amazing Spider-Man – I gotta be honest, I rarely read this book.  But I hear Dan Slott’s got a ton of awesome stuff lined up for his run that kicked off with the last issue, so it kind of piqued my interest.  Also, the Black Cat cameo made me happy—I want to see Black Cat on the Avengers alongside Cap and Spidey, I would geek out pretty hardcore for that.

She-Hulks – No idea what’s going on here.  Thought this was the launch of a new ongoing, but apparently it got busted back down to a four-issue mini-series.  No idea who Lyra is or anything—haven’t read any Shulkie since her last Dan Slott/Peter David series got canned (which made me sad).

Scarlet – Ehhh … kind of like it, kind of don’t … still reading.

Uncanny X-Force – Second issue comes out today and I can’t wait to pick it up!

So, there’s my short list of just a few things from recent weeks.  Any suggestions?  What recent releases SHOULD I be reading that I’m not?  Opinions, comments, questions welcome.

Box art for the highly-anticipated Marvel vs. Capcom 3 video game was released this week; interesting to note that not a single female Marvel character made the cut for the box: 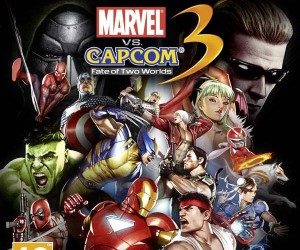 Meanwhile, Capcom represents three.  Add to that, the only playable female characters on the Marvel side that have been revealed are She-Hulk and X-23.