Things that Kill my Soul

It’s the Return of Catwoman the Contortionist

DC released their September solicitations this week, and the cover for Catwoman #0 has born reactions that are nothing short of hysterically funny.  Check out this slideshow of mockery that had me just guffawing, the tears streaming down my face.  I’d considered posting my own reaction to the obscene ridiculousness of the cover, but then there are plenty others who have already summed it up, and so eloquently, too.

I almost feel bad for Guillem March.  I’m not sure the anger is really warranted toward him; if anything, the blame and frustration should be placed on the editor who OK’d this.  That editor was not doing their job … or, perhaps this is exactly what they believe their job to be—to spurn enough fury to get the Internet talking, bringing attention to this book, getting Catwoman “out there.”  For all the unbelievably wrong reasons, of course.

But in a week that has seen some other depressing things and disgusting behavior toward women, there’s still at least one thing to celebrate.

Apologies for the massive linkage, but in lieu of reviews this week, this is some important reading.

More Fuel for the Depressing Fire

Misery loves company, and for women in comics, it seems that their magazine counterparts have got it just as bad.  According to this article from Think Progress, America’s top magazines do just as horrendous a job of hiring ladies as the comic book industry does.  There’s some nifty pie charts there as well, illustrating the female/male ratios per publication.  Pretty ridiculous stuff we’re looking at here.  Let’s see … 165 females to 459 males?  Really, The New Yorker?

The article brings up thoughts that are only all-too-familiar:

Because really, the only answer here is not that these publications can’t find women. It’s that they don’t really care if they do or not. These numbers, and the annual discussion of them, seem to have succeeded in making a lot of female journalists and readers angry and frustrated, but they don’t appear to have made editors feel ashamed, much less called to action. And I’m not quite sure what it would take to persuade them to shake off their lethargy and acceptance of the status quo, which really means accepting sexism.

I wonder where I’ve heard/felt/read/written this before.

And hey–did you know that the new Avengers movie trailer came out today?  It’s completely awesome, of course.  But then I look at it and inevitably start counting … one female Avenger.

It’s Wednesday afternoon, and through a girl’s eyes, the world in which I live appears particularly hostile today.

The Nielsen ratings are in for DC’s New 52, and the results are … pretty depressing, though not surprising.

Read about it here.

Kind of rips you apart a little, doesn’t it?

Haven’t picked up my comics in a couple of weeks, nor have I had the time to read what I have, so it’s going to be a review-less weekend.  To satiate your appetite, head on over to Nerd Caliber for a little ditty I wrote up on Marvel’s 2012 event, Avengers vs. X-Men, and check out some of their other fun features as well.

It’s a crisis there’s no Crisis!

So apparently Dan Didio said something over Facebook about how none of the Crises ever happened.

Can anyone else make any sense of this?  I must be missing something.  If Final Crisis never happened, then what caused Bruce to “die” and Dick to take up the mantle of Batman?  That’s already been referenced in several books, and Grant Morrison’s run is still technically happening and referencing itself as it goes along, so we know it’s still canon … yet it’s not?  Can anyone help me out here?

He went on to “clarify” (I use the term loosely): 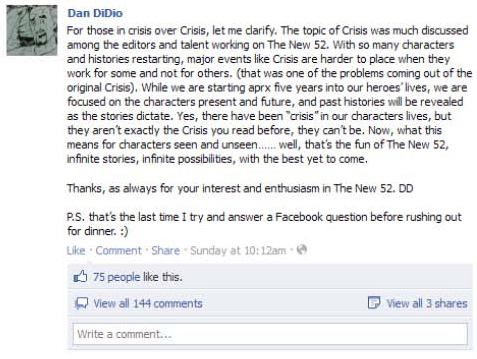 Ohhhh, I get it now.

I would say, given that the entire initiative of the New 52 was to wipe the slate completely clean in order to erase and/or make continuity “less confusing” for new readers, the fact that now we have even MORE of a convoluted backstory to all of this, where neither reader nor editorial apparently knows what’s sticking and what isn’t, means that after only one month of the reboot, it’s already a failure story-wise.  None of this makes any sense.  I can’t say I really expected it to, but it’s making even less sense than I thought it would.  And it’s just plain annoying.  Way to make this stuff up as you go along, guys.

On the bright side, at least Gail Simone still makes me laugh. 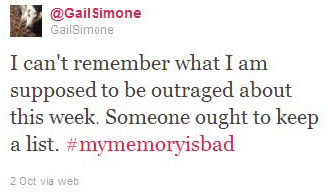 And they wonder why “girls don’t read comics”?

Actually, I should probably change that title to “why MORE girls don’t read comics.”  Clearly, many of us do, although it’s getting increasingly more difficult….

No reviews from me this week, as I haven’t had a chance to read the stuff I wanted to review.  Instead, I leave you with this very striking post from Laura Hudson at Comics Alliance about DC’s latest fail.  It’s worth a read.  Warning that it contains spoilers to Red Hood and the Outlaws #1 and Catwoman #1.  I would also say that some of the imagery might be deemed “NSFW,” which is telling when you figure that the images have only been taken from the aforementioned books.  Kind of messed up, no?

Have a good weekend, all.  Pick up Wonder Woman #1 and the latest Children’s Crusade.

Reblogged from DC Women Kicking Ass:  The DC Comics panels at SDCC have been filled with what I’m being told are uncomfortable and awkward moments around the issues of female creators and characters… [read more].

That’s some seriously screwed up stuff right there.  I wish I were at that panel to cheer this woman on.