More Fuel for the Depressing Fire

Misery loves company, and for women in comics, it seems that their magazine counterparts have got it just as bad.  According to this article from Think Progress, America’s top magazines do just as horrendous a job of hiring ladies as the comic book industry does.  There’s some nifty pie charts there as well, illustrating the female/male ratios per publication.  Pretty ridiculous stuff we’re looking at here.  Let’s see … 165 females to 459 males?  Really, The New Yorker?

The article brings up thoughts that are only all-too-familiar:

Because really, the only answer here is not that these publications can’t find women. It’s that they don’t really care if they do or not. These numbers, and the annual discussion of them, seem to have succeeded in making a lot of female journalists and readers angry and frustrated, but they don’t appear to have made editors feel ashamed, much less called to action. And I’m not quite sure what it would take to persuade them to shake off their lethargy and acceptance of the status quo, which really means accepting sexism.

I wonder where I’ve heard/felt/read/written this before.

And hey–did you know that the new Avengers movie trailer came out today?  It’s completely awesome, of course.  But then I look at it and inevitably start counting … one female Avenger.

It’s Wednesday afternoon, and through a girl’s eyes, the world in which I live appears particularly hostile today.

“All we need to do is make sure we keep talking….”

Heeeyyyyyy!  Guess who has had no time to write things?  ME!  Guess who is not at all surprised by this, (I bet)?  YOU!

So rather than do a legit review, I’m just going to talk about anything and nothing … because I would rather make a jabbering post than no post at all.  You’re more than welcome to talk back.

So I’ve caught up on the last two issues of Rachel Rising, and oh crap, is Terry Moore freaking me out.  I thought issues 1-3 were creepy … until I read 4 and 5 over the weekend and was taken to a new level of disturbed.  I hope you all are reading this book.  You should have no trouble finding it at That’s E, and as much as I hate promoting digital comics, it was just newly added to Comixology with issue 1 priced at 99 cents, so you have no excuses not to at least try it.  Outside of The Walking Dead, I typically shy away from stuff like this, so the fact I’m still on board here (especially after seeing the cover to issue 9 … *shudder*), says a lot.

Another AWESOME book I started reading is Ed Brubaker’s Fatale, about which I cannot say enough good things.  Wow.  These are some great comics being made.  When I start to get depressed about stupid gimmicky junk out there, I pick up books like this and my sanity eventually returns.

Speaking of Ed Brubaker and/or, for that matter, gimmicky junk—does Winter Soldier fall into that category?  I haven’t gotten my hands on it yet, but if Brubaker’s name is on the cover, I can’t imagine it will be bad.  Despite my UTTER HATRED of how they handled Bucky’s “death” in Fear Itself, he’s a great character, and I’m excited to read this new title.

All right.  That’s enough about the guys.  Let’s talk about the wimmins.

Did you all read Kelly Thompson’s fantastic article on Comics Should be Good?  Because it’s very, very important that you do.  Check it out here.  Please.

I hear that Mera kicks all kinds of ass in this week’s issue of Aquaman.  This makes me happy.

WOMANTHOLOGY!  I preordered my copy last week and I’m soooooo excited to get my hands on it!  If you have not heard about it, this is a record-breaking Kickstarter grassroots project about women, by women, for everyone.  And it’s going to be phenomenal.  Click the link just there, or check out their Twitter page.

Lastly, even though everyone and their mom has already linked to this, I’m going to link to it, too!  A new trailer for Pixar’s Brave is out, and IT IS AWESOME:  http://spinoff.comicbookresources.com/2012/02/23/new-trailer-poster-for-brave/

Move aside, boys, move aside.

That’s all I have this week—check in again soon for more talk about stuff and things.  And in the meantime, you know, comment or e-mail.  It’s fun and I don’t bite that hard.

Have a great weekend, all.
xx R

Yeah, that was pretty awesome.

So I went to this signing at Pandemonium Books in Cambridge last night.  I found out about it kind of last-minute (good thing I finally signed up to Twitter) and was looking for someone to come with me, which no one did because my friends are lame and don’t like to drive out to Cambridge.  Lucky for me, I happen to work in this lovely city, so I’m here every weekday whether I want to be or not.  Last night was one of those rare occasions I actually wanted to be here.  I mean, I even stayed at work for an extra half hour for the opportunity to meet Marjorie.  That’s dedication (right?).

I got to Central Square and I basically had no idea where I was going.  I’d never been to Pandemonium Books before, and for some reason I was expecting this gigantic, Borders-like book store, which could not be further from what I actually found.  It’s a tiny little thing just around a corner off Mass Ave.—not bad tiny, but more like cozy tiny (although it appears they do have a good gaming space downstairs that I didn’t check out), and when I walked in, I was immediately greeted by the kind gentleman behind the counter who asked me if I was there for the signing. 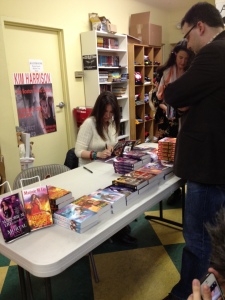 I arrived incredibly early—the signing was at 7:00 and I’d gotten there at about 6:15, so I spent some time perusing the shelves and feeling a little awkward.  A table of Marjorie’s books was set up in the middle of the floor, with a little over a dozen chairs lined up facing it.  Let me reiterate—this place is small.  It was a small setup.  So while my brain was expecting some sort of grand assembly beforehand, when I walked in and realized we’d all be breathing down her neck, I admittedly got kind of nervous.  I’m more of a “hang back” type of person when I go to these things—sit in the middle of the pack, keep quiet, and just wait to get up to the table to get my book signed.  No nonstop chitchat from me, no hassling the creator—at most I may ask for a picture, but that’s as far as I go.

At quarter to 7:00 when it was just me and one other girl sitting there by ourselves (in the front row, no less), what I thought was panic but actually turned out to be excitement set in.  I was admittedly concerned that no one else would show up for this thing—how terrible would that be?  Well … I was concerned up until the point Marjorie walked in, immediately began talking to us, and offered to sign our books, that I relaxed a little and thought, yeah, this is completely awesome.  Others did arrive, of course, but it was still a tight-knit group, and very relaxed atmosphere—so much so that I broke my “keep quiet” attitude and asked a couple of questions.

Marjorie is incredibly sweet, fun to talk to (and listen to), and totally easy going.  She read a short excerpt from her new book, Within the Flames, and took Q&A about many topics, from her work with Marvel, to her novel writing, to her opinions on the DC reboot and whatever in between.  (I totally meant to ask her about her poodles, too, and I forgot.  Damn.)  Honestly, some of the Marvel stuff was a little depressing—such as hearing that her pitch for an all-female team book consisting of She-Hulk, Elektra, and Mystique was shot down because it “won’t sell.”  We all know Marvel and DC pander to teenage boys, but actually hearing that confirmed out loud by a creator leaves me kind of gutted.  Luckily there are still plenty of good things to keep me happy and excited, such as Marjorie’s upcoming run on Astonishing X-Men.  There were also plenty of other girls in the audience—girls who read comics and actually know what they’re talking about, and that’s always awesome.  We aren’t as rare as you might think.

At the end, I shook Marjorie’s hand and thanked her for taking the time to speak with us.  She sincerely thanked me for coming out, and I hopped out of the store to catch my late train home, quite tired but very happy.

And then the weirdest thing happened this morning (thank you, again, Twitter).

Apparently, none other than Mister Junot Diaz had been present in the audience with us last night.  I remember looking at him as he asked questions, thinking to myself that I’d surely seen him somewhere before… hmm… he’s sooooooo familiar?  Well, it turns out it was Mr. Diaz—a fact I only knew from reading my Twitter feed this morning where everyone basically had the same MIND BLOWN reaction I had.  Jesus—this man’s books were practically my college curriculum.  Fiesta 1980 is one of my all time favorite short stories.  Dude was in the same room with me all night and I had no clue.  The event was already awesome on its own, and I’d woken up this morning still floating a little from the high it gave me—to read about that just took it to another level.  Two for the price of one.

The Nielsen ratings are in for DC’s New 52, and the results are … pretty depressing, though not surprising.

Read about it here.

Kind of rips you apart a little, doesn’t it?